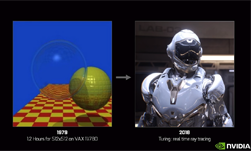 At SIGGRAPH 2019, NVIDIA showed how GPU-accelerated ray tracing provides artists with new levels of interactivity and boosts rendering speeds for film and design.

NVIDIA OptiX API is evolving rapidly, and many designers are using OptiX to get the best performance for production.

In this talk, Steven Parker, Vice President of Professional Graphics at NVIDIA walks his audience through the history of ray tracing at NVIDIA, starting in 2008 when he joined the company.

In little more than a decade, real-time ray tracing has evolved from a pipe-dream to a technology that can be processed on consumer-grade GPUs, Parker explains.

“In 2008, David Kirk said, ‘Ray tracing is the technology of the future, and it will always be!’” said Parker. “In 2018, that old joke is no longer applicable. I suggest we replace it with, ‘Ray tracing is simple enough to fit on a business card, yet complex enough to consume an entire career.’”

OptiX 7 is new low-level API that is completely CUDA-centric. Developers have full control over memory management, acceleration structure builds, and how the work gets distributed between multi-GPUs.

With OptiX 7, the language interface and sustainable APIs are now more consistent across the different ray tracing platforms that NVIDIA supports. It’s also more scalable for production rendering, improving the time it takes to start up a system, as well as the resources that are required on the host that’s driving it.

Some of the major updates that come with OptiX 7 include:

To learn more about the these and the latest features of OptiX 7, watch the session with Parker.

Hear more about the latest NVIDIA technology by watching on-demand sessions or developer talks from SIGGRAPH.