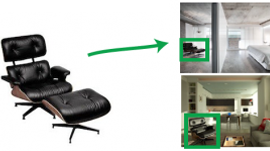 Take a photo of a chair and a new mobile app will tell you where to buy it, and show you pictures of how it will look in various rooms.

“It seems a lot of people want to buy things they see in someone else’s home or in a photo, but they don’t know where to look,” said Sean Bell, a doctoral candidate at Cornell University and co-developer of the app.

The researchers first leveraged the Amazon Mechanical Turk crowdsourcing service to help build their training set of images. They showed the workers scene photos and asked them to draw boxes around objects. The resulting collection of boxes, along with their matching iconic images were then used with an NVIDIA GeForce GTX 1080 GPU and the cuDNN-accelerated Caffe deep learning framework to train their models.

Their system then uses GPUs in the Amazon cloud to help match an uploaded photo from a large database from manufacturers’ catalogs or specialized websites devoted to home furnishings. Bell and Kavita Bala, a professor at Cornell, formed a startup called GrokStyle, to offer the service as a subscription basis to retailers and design professionals and mention the system can be further developed to support clothing and fashion.