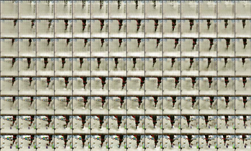 With just the beginning and end frames, this 3D convolutional neural network can fill in the gaps. The process, known as “inbetweening,” can generate intermediate frames between two given points. The technique is normally executed by training and running recurrent neural networks.

“Imagine if we could teach an intelligent system to automatically turn comic books into animation,” the Google researchers stated in their paper.  “Being able to do so would undoubtedly revolutionize the animation industry.”

The proposed model put forth by the Google team consists of three components: a 2D-convolutional image encoder, a 3D-convolutional latent representation generator, and a video generator.

The results: each sample in the data set contained 16 frames in total, 14 of which the neural networks generated. The model ran over 100 times for each pair of keyframes. The entire procedure was repeated 10 times for each model variant.

“Despite having no recurrent components, our model produces good performance on most widely-used benchmark datasets. The key to success for this approach is a dedicated component that learns a latent video representation, decoupled from the final video decoding phase,”