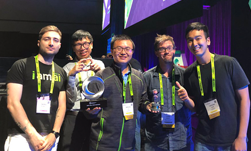 GauGAN, NVIDIA’s viral real-time AI art application just won two major SIGGRAPH awards, “Best of Show” and “Audience Choice,” at the “Real Time Live” competition at SIGGRAPH 2019, one of the most anticipated events of the conference.

GauGan is based on a generative adversarial network that was trained on over one million real landscape images. Training was performed on an NVIDIA DGX-1 system, comprised of 8 NVIDIA V100 GPUs, with the cuDNN-accelerated PyTorch deep learning framework.

The interactive application is the first semantic image synthesis model that can produce complex and lifelike images with only a few brushstrokes.

“As an artist it’s extremely valuable to be able to generate content quickly because artists need to iterate fast,” Kilmov told the crowd. “GauGan allows us to generate our ideas at a speed that was previously not possible, and this will become a main tool for artists to use in the future,” he added.

The live demo was powered by an RTX Studio Laptop and a Wacom Cintiq.

“We hope that our tool can serve as an iron man suit for artists for boosting imagination and productivity,” Park said.

The team has publicly released the source code for GauGAN, making it available for non-commercial use for developers to experiment with and build their own applications.

You can view a replay of the Real Time Live competition here at the 48:45 time stamp. You can also try GauGAN on NVIDIA’s AI Playground here.