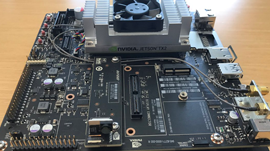 We love seeing all of the NVIDIA GPU-related tweets – here’s some that we came across this week:

#jetsontx2 in the morning and #dgx1 in the afternoon.. What am I up to?

Newest NVIDIA Jetson TX2 that my team is working on for Watson Use cases at the edge of Network. pic.twitter.com/BhcVK5iKAy

Remembered that I have the brand new MacBook Pro and thus, can't do @GPUComputing

On Twitter? Follow @GPUComputing and @mention us so we’re able to keep track of what you’re up to.