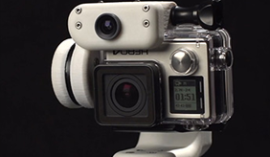 A team of students and alumni from UC Santa Cruz developed a prototype device called Raven that clips onto a GoPro camera and automatically tracks a selected target with the help of computer vision.

Enes Mentese, cofounder of Raven, thought of the idea for the device after he filmed his snowboarding experience and majority of the video was of sky and the ground.

By using an NVIDIA Jetson TX1 and machine learning, the system actively “learns” to recognize the object being tracked as it moves and changes position.

“It’s very computationally intensive, but we wanted to keep the system small and compact, so it was a complex project in terms of both the hardware development and the software development,” Mentese said.

The team is gearing up to launch a Kickstarter campaign to raise funds so they can start to manufacture the device.