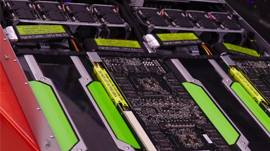 We love seeing all of the social media posts from developers using NVIDIA GPUs – here are a few highlights from the week:

Should be titled everyone partners with nvidia on AI development. Cuda is controlling the market. https://t.co/75ElB6ZhO2

On Twitter? Follow @GPUComputing and @mention us and/or use hashtags so we’re able to keep track of what you’re up to: #CUDA, #cuDNN, #OpenACC.