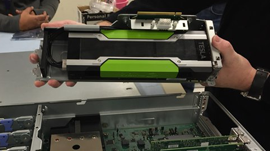 We love seeing all of the social media posts from developers using NVIDIA GPUs – here are a few highlights from the week:

Just two years ago, we started FAIR — Facebook AI Research. Since then the team has developed AI systems that make the…

Glad to see Facebook moving to 8 GPUs/box for deep learning. This configuration has been good for us as well! https://t.co/0gXt6iYYAZ

Just had coffee with a friend who's doing machine learning on GPUs. Never have I been so excited about the possibilities with AerinBot.

On Twitter? Follow @GPUComputing and @mention us and/or use hashtags so we’re able to keep track of what you’re up to: #CUDA, #cuDNN, #OpenACC.