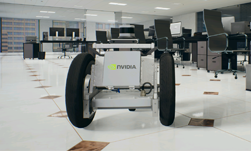 This week at TechCrunch’s Robotics + AI event at UC Berkeley, NVIDIA’s VP of Engineering, Claire Delaunay, was joined on stage with the company’s Kaya and Carter robots to showcase the company’s push to democratize robotics development.

Isaac SDK is now available for download and accelerates development for manufacturers, researchers, and startups by making it easier to add AI for perception and navigation into next-generation robots.

Using computational graphs and an entity component system, the Isaac Robot Engine allows developers to break down complex robotic tasks into a network of smaller, simpler steps. Developing a complex system is made easy using Gems, which are modular capabilities for sensing, planning, and actuation that can be easily plugged into a robotics application.

For example, developers can add obstacle detection, stereo depth estimation, or human speech recognition to enrich their robot use cases.

Robotics applications developed on the Isaac Robot Engine can seamlessly run on edge devices like the NVIDIA Jetson Nano and NVIDIA Jetson AGX Xavier as well as a workstation with a discrete NVIDIA GPU.

NVIDIA provides reference applications to learn the basics of robotics all the way up to advanced delivery and research robots.

Isaac Sim is a virtual robotics laboratory and a high-fidelity 3D world simulator. It accelerates research, design, and development in robotics by reducing cost and risk. Developers can quickly and easily train and test their robots in detailed, highly realistic scenarios.

Developers can use virtual robots with simulated sensors (RGB, stereo, depth, segmentation, LIDAR, IMU) in Isaac Sim to test their applications in a high-fidelity simulation environment. Once tested, applications can be deployed to NVIDIA Jetson AGX Xavier, Jetson TX2, or Jetson Nano running on physical robots.

Robots in Isaac Sim are tightly coupled to the tools and frameworks in the Isaac SDK, enabling easy transfer of algorithms and data between physical and virtual robots.