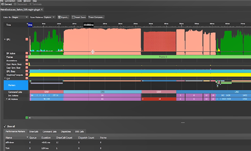 In this video, Aurelio Reis, Director of Graphics Tools at NVIDIA, details the three most important things developers need to know about Nsight Graphics.

3: GPU Trace is Here to Help

In addition to numerous enhancements since GPU Trace was unveiled last year, you can now see the fences that may be causing stalls in your frame. Also, as requested by many developers, we’ll be unveiling the all new Metrics Graphs; a new feature that allows you to see low-level GPU metrics over the course of your frame. Never before have developers been able to peak under the hood of NVIDIA GPUs to this degree, allowing you to identify low-level performance limiters and warp execution stalls.

2: Reduce the Frustration of GPU Crashes with Nsight Aftermath

GPU Crashes are an incredibly time consuming and frustrating part of development. Nsight Aftermath gives you the ability to generate and view GPU crash dumps that point you directly to the reason and exact location of your crash within your shaders. Your QA team can share these crash reports with developers, saving countless hours of debugging.

Developing Real-time Ray Tracing applications is more enjoyable when you have tools like Nsight Graphics. With full support for debugging DXR and NVIDIA VKRay, you can inspect the shader bind table, Pipeline State Objects, Acceleration Structures and DispatchRays or TraceRays calls, giving you full visibility into your Ray Traced scene. Performance is critical and at GDC, we’ll have an exciting announcement about a new tool we’ve been working on to help you make your game perform best on RTX GPUs!

You can see a live demo of Nsight Graphics on the show floor of either GTC or GDC.