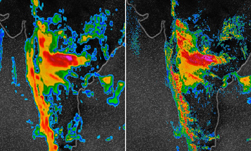 The new system named GRAF, Global High-Resolution Atmospheric Forecasting System, can predict something as small as thunderstorms globally.  “Compared to existing models, GRAF will provide a nearly 200% improvement in forecasting resolution for much of the globe (from 12 to 3 sq km),” the IBM team wrote in a blog post.

“Today, outside of the United States, Japan and a handful of other countries primarily in Western Europe, the rest of the world has to settle for less accurate forecasts for predictions that cover 12- to 15-kilometer swaths of land — too wide to capture many weather phenomena,” the team said. “Traditionally, leading weather models update less frequently, only every 6 to 12 hours. In contrast, GRAF will provide 3-kilometer resolution that updates hourly, delivering reliable predictions for the day ahead.”

“None of this could have been done easily without software and compiler tech like the OpenACC directive,” said Todd Hutchinson, Director of Computational Meteorological Analysis and Prediction at The Weather Company. “In particular, it is capable of directing work on the GPUs and makes it much easier to do the port.” The system has the potential to help airlines better minimize disruption from severe weather, can help first responders with storm recovery efforts, and can enable utility companies to better prepare for storm outages.

The data from the model will be made available later in 2019.