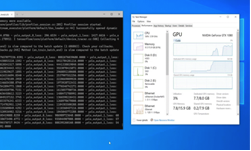 Today, NVIDIA and Microsoft’s collaboration opens the Public Preview accessibility for those registered in the NVIDIA Developer Program and the Microsoft Windows Insider Program. Program members can access the CUDA Driver/Container package via Downloads and Documentation from NVIDIA’s CUDA on our WSL page.

Targeting a spectrum of AI enthusiasts from expert data scientists, to beginners, and students, WSL and the work that NVIDIA has done now puts GPU-accelerated DL at the fingertips of Windows users. With the interface layer enabled in WSL 2, NVIDIA can now deliver CUDA programming support, open source software libraries such as RAPIDS, and pre-validated deep learning frameworks such as TensorFlow, MXNet, and PyTorch to a growing wave of new users, leveraging their familiar Windows systems.

Enabling Windows users across numerous industry, academic, and personal domains, NVIDIA has validated the CUDA on WSL support on a variety of NVIDIA graphics cards and laptops powered by GPUs – including systems like: NVIDIA GeForce, and NVIDIA Quadro.

NVIDIA WSL documentation and download images can be found on our CUDA on WSL web page, and developers can use our Forum for sharing their public preview feedback with the WSL community.