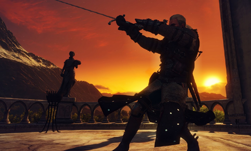 Learn how CD Projekt Red integrated 150 lines of code, and wound up with more than 2 million Ansel photos of The Witcher III: Wild Hunt published! In this video, we explain the value of Ansel, and describes the product’s benefits to players.

You can find six additional coffee-break length videos about NVIDIA Ansel and Highlights on the NVIDIA developer blog.