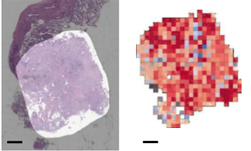 According to the American Cancer Society, over 200,000 people in the United States are diagnosed with lung cancer every year. To help with early detection, researchers at the New York University school developed a deep learning algorithm that can identify two common types of lung cancer with human accuracy.

“The purpose of this study was to develop a deep-learning model for the automatic analysis of tumor slides using publicly available whole-slide images and to subsequently test our models on independent cohorts collected at our institution,” the researchers stated in their paper.

The NYU team based their convolutional neural network on the open source Inception v3 image recognition model, which has been successfully used to detect skin cancer and diabetic retinopathy.

The researchers then evaluated their dataset on whole slide images from separate datasets. They also enlisted three independent pathologists to classify the slides.

“Our study demonstrates that convolutional neural networks, such as Google’s inception v3, can be used to assist in the diagnosis of lung cancer from histopathology slides: it almost unambiguously classified normal versus tumor tissues (~0.99 AUC) and distinguishes lung cancer types with high accuracy (0.97 AUC), reaching sensitivity and specificity comparable to that of a pathologist,” the team stated on their paper.

The research was published this week in Nature Medicine, and the code was also published on GitHub.